​A VINTAGE YEAR FOR INSIDER TRADING​​

In this novel, one of the lawyers, George DeRosa grumbles about the US law of insider trading:

"I don’t like the fuzziness of it. From my admittedly brief research, the law of insider trading looks like a Frankenstein monster. It’s a labyrinth of case law stitched together with various SEC rules and regs, all derived from section 10(b) of the 1934 Securities and Exchange Act. The appellate courts have to keep weighing in on who’s breaking the law—and who isn’t—because there’s no clear statutory guidance on what constitutes illegal insider trading. It’s an unnatural beast.”

He has a point.

In Dirks v. SEC, 463 U.S. 646 (1983) the US Supreme Court established the legal criteria for determining the existence of illegal insider trading. However, the legal battles that have ensued in federal District and Appellate courts since 1983 suggest that the Dirks legal precedent is far from clear.

In US v. O'Hagan, 521 U.S. 642, 666 (1997)  the US Supreme Court established the legal criteria for determining the existence of illegal insider trading under the misappropriation theory of insider trading. However federal District and Appellate court decisions after O'Hagan also lack consistency.

​This novel was published in 2015. Court decisions and legislation can change.

For example, some want the US Congress to codify US law of Insider Trading. Therefore the law of insider trading may be changed to provide a clearer understanding as to when someone is or is not guilty of illegal insider trading. 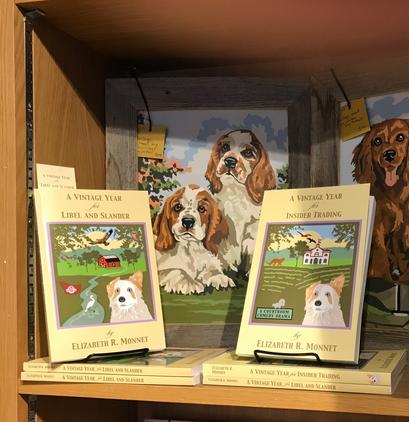 Novels at Sausalito Books By The Bay

A VINTAGE YEAR FOR LIBEL AND SLANDER

In this novel Sidney, the bossy Australian Shepherd paraphrases a famous quote from Charles Dickens’ novel Oliver Twist when he complains to his Avian Network friends “… the law is an ass. It’s stupidly rewarding bad behavior…”

In A Vintage Year for Libel and Slander, the court applies California’s Anti-SLAPP legislation to dismiss a libel lawsuit against the mainstream press after the press re-publishes wild social media theories and speculation about the theft of a $50 million diamond ring. (SLAPP means a Strategic Lawsuit Against Public Participation.)

Similarly, the court carefully weighs the right of an individual not to be libeled or slandered against the importance of applying the First Amendment to anonymous posts on social media. In weighing these competing interests, the court will apply “the reasonable reader” test – see Krinsky vs. Doe (2008) 159 Cal. App. 4th1154.

For example, in Summit Bank vs. Robert Rogers (2012) 206 Cal. App. 4th 669, the California Court of Appeal ruled that a diatribe posted by the defendant on Craigslist wasn’t libelous because the “reasonable reader” wasn’t likely to take the diatribe seriously.

In contrast, in ZL Technologies vs Does 1-7 (2017) 13 Cal. App. 5th 603, the California Court of Appeal ruled that anonymous posts on Glassdoor could be found libelous because the “reasonable reader” might take these factual posts seriously.

Similarly, the Court of Appeal also ruled that critical posts on Yelp can be found libelous if they meet the “reasonable reader” test. If so, Yelp must turn over documents that might reveal the identity of any anonymous poster who has posted a factually false critical review – see Yelp vs. Superior Court of Orange County(2017) 17 Cal.App.5th 1.

This novel was published in 2019. Court decisions and legislation can change.